Jan Santini Aichel subscribed as “painter and architect” on the official document confirming that he had gained burgher status, dated 20 October 1705. He had got trained in both these professions with Jean Baptiste Mathey until 1695. While his architectural work is represented by approximately eighty buildings, we do not know any Satnini's painting and it seems that he was not occupied with painting anymore during his architectural activities. The only evidence of his outstanding painting and draftsmanship education is the exceptional quality of his design drawings. His drawings also help us understand his way of architectural thinking and discover distinctive principles of his buildings. 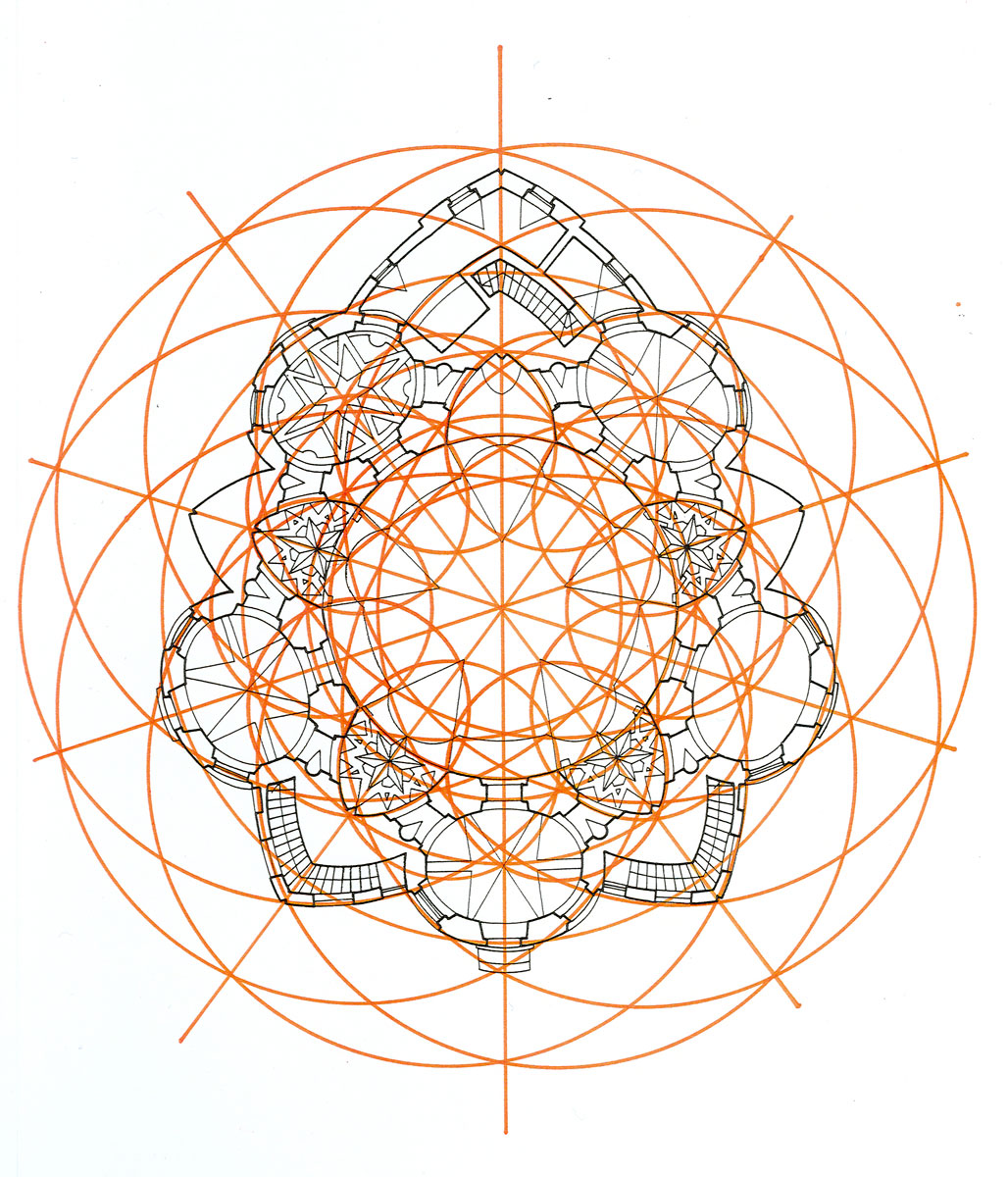 The well-known ground-plan of the peak Santini's work of art – Church of St John of Nepomuk on Zelena hora hill in Zdar nad Sazavou – was purely and exactly designed by means of a pair of compasses on the paper surface. Logical steps of ground-plan composition, utilization of construction in golden section proportion, full multiples of semi-diameter proportions of the individual circles used - all that had both formal and symbolic quality of contents from the beginning. The resulting geometric pattern is thus a sort of purely drawing ideogram, matter of fact more academic and intelligible than constructional. Sections of the building and its exterior composition are considered by means of the same abstract methods in the vertical surface. In this phase of the project, the building scheme arises as a sort of abstract minimized network marking out the inferior space and, at the same time, opening it to the cosmic infinity. Nevertheless, network of vertical sections shows also clear structure of dematerialized but doubtless construction system in the spirit of cathedral supporting structures, with sufficient dimensioning of wall thickness even in the layout sections. It seems as though the abstract linear network primarily determined not only the appearance, but also the mass dimensions of the building as well as its constructional relations. Further shape structuring of exterior and interior of the church – fundamentally completed by the newest findings of the original appearance of the central space vault composition – evoked and further deepened impression of the building as a dematerialized tangle of lines permeated by light; of the building of higher, sacred character.

Analyses of other buildings and projects by Jan Santini Aichel also evidence that this – symbolic and idealistic - character was generally valid for Santini's sacred buildings and that it was intended and purposefully prepared by the creator himself as well as the investors. In this sense, Santini's architecture is a distinctive aesthetic testimony on the deepest qualities and potential of architectural reality enunciating the world's obviousness. And these are just the aspects where Santini's architecture goes beyond common aesthetic standards of the time when his work of art was created, and becomes artistic reality, baroque though, but super-style in a special sense at the same time.