Jean Baptista Mathey (in French: Jean Baptiste Mathey, in Italian: Giovanni Battista Mathey) (1630 Dijon- 1696 Paris) was an architect and painter working in the Czech lands in the late 17th century. His architecture marks arrival of the period of Baroque at its peak, represented by the names of Jan Santini Aichel, Kryštof Dientzenhofer and Giovanni Battista Alliprandi within the Czech lands. Just like Jan Santini Aichel, neither Jan Baptista Mathey was accepted to the building guild. The Archbishop of Prague John Frederick of Wallenstein brought him to the Czech lands in 1675 and he worked as an architect here.

He got trained as a painter in Rome, but not a single painting artwork has been documented to this day. During his more than twenty-years long stay in Rome, he worked for example for John Frederick of Wallenstein who invited him to Prague as his personal architect to Prague as soon as he was elected Prague's Archbishop.

Even though Mathey was French, his academically chaste projects do not show any marked influence of French architecture of that time. His style was absolutely clearly influenced by Italian, in particular Roman architecture.

It is not obvious by now, how and where he learned to design, but most probably, he worked in one of Roman architectural studios as a drawer. It would have had provided him with an excellent opportunity to get acquainted with the most modern implementations of architecture and even the unimplemented projects.

Of course, most of his implementations were intended for the archbishop and the related aristocrats and church orders, but he also built for example in the Prague's Castle.

Relationship between Santini and Mathey

Jean Baptiste Mathey probably accepted Jan Santini Aichl to apprenticeship because Jan Santini was not able to get trained in his father's physically demanding craft due to his physical handicap, but, by experience from his father's stone cutting workshop, he was well acquainted with the intellectual aspect of stone masonry such as precise structure according to the today's descriptive geometry. Undoubtedly, Santini gained sense of perfection of architectural forms and concepts and composition arrangement with Mathey, as well as knowledge up-to-date development of Roman creation and desire for a first-hand Italian art experience. Together with Mathey, he probably got in contact with Theatine College in Prague, and together they designed the Church of Our Lady of Oettingen in Nerudova Street in Malá Strana (Lesser Town). Apparently, soon after Mathey's departure for France in the summer of 1695, Santini set forth an apprenticeship journey towards the South.

He introduced several new elements into the Czech architecture: a three-wing chateau type with one central hall, pavilion elevation of the central part of the palace, church on a Greek-cross ground-plan and design of a soft composition structuring of walls by means of a pilaster system, lesenes and lesene frames. 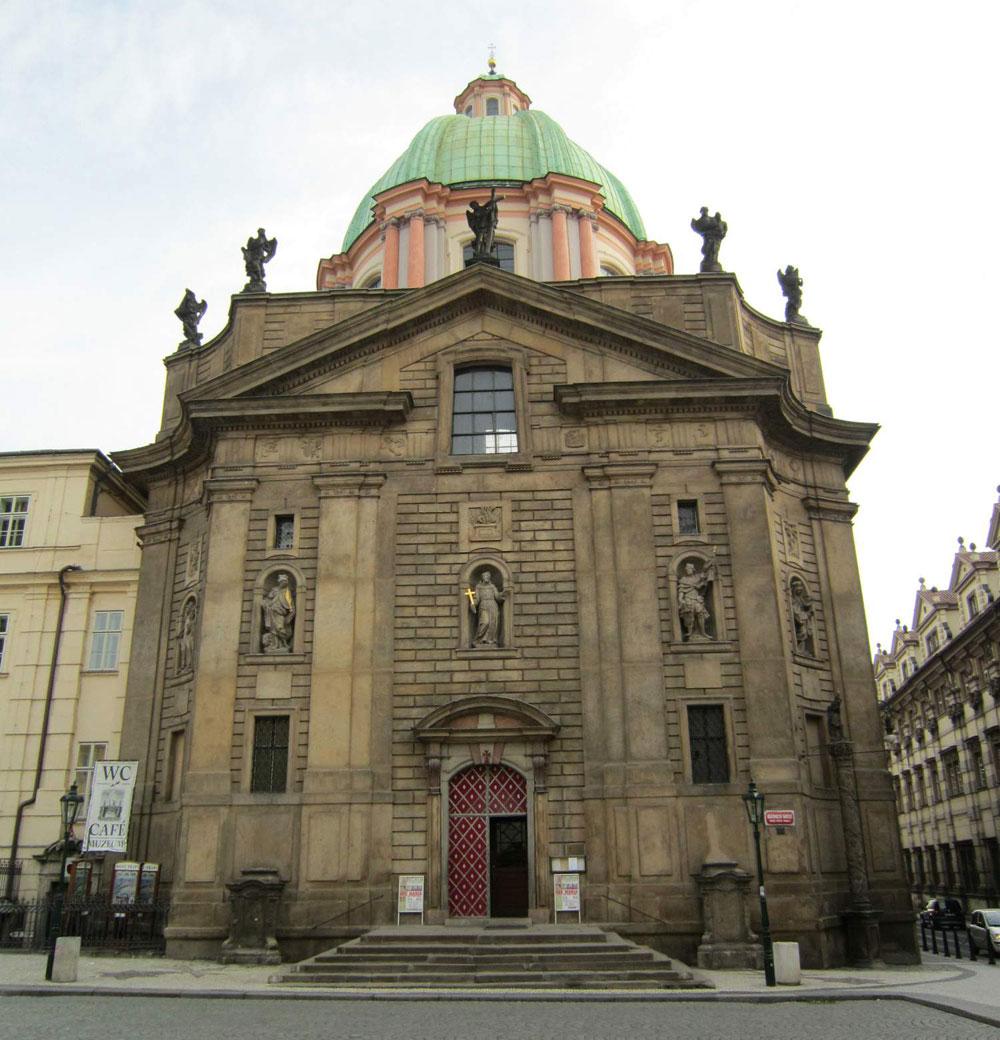 Mathey's first and best implemented project was Prague's Crusader Church of St Franciss of Assisi nest to the Charles Bridge. This early-baroque shrine with an impressive walled cupola was built by D. Canevalli according to J. B. Mathey's design. The main axis of the church is untypical because it points from the North to the South. The probable reason is the disposition of the church within the built-up area, where the entrance is situated towards the town square. The Mathey's contemporaries, impressed by his work, got the plans of this exceptional building, unusual in that time, copied. Interior was decorated with sculpture by M. V. Jackel, painting on the high altar by J. K. Liska, fresco by V. V. Reiner etc.

Archbishop's Palace
Large reconstruction of the palace in Prague's Hradcany was made from 1676 to 1694 during the period of the Archbishop John Frederick of Wallenstein. He committed the reconstruction project to J. B. Mathey who, for example, newly fitted the palace with a balcony from Slivenec marble in the main façade with an inscription Johannes Fridericus archiepiscopus Pragensis, i.e. John Frederick Archbishop of Prague.

Tuscany Palace
The palace has been a dominant and significant building of the upper side of the today's Hradcanske namesti square up to now. Count Michel Oswald Thun bought a few burgher houses in 1685 and decided to build a representative residency in their place. He chose the architect J. B. Mathey for this purpose, who designed a building consisting of four wings with three floors in this prestigious location. The palace has got two entrances with lookout pavilions and a terrace above them.